Duckhorn has spent a quarter of a century establishing itself as one of North America’s premier producers of Bordeaux varietal wines. They approached CF Napa Brand Design with a daunting task: make a successful brand even more successful and stage it for future growth. The challenge included realigning the tiers for better differentiation, upgrading the packaging for all the tiers, re-launching the entry-level wine “Decoy” and creating a package for a new top offering.

When they came to see us at CF Napa, the folks at Duckhorn had one clear ambition: to make their brand even more successful, yet retain the key equities that had made it an icon in the marketplace. Their desire was to restructure their tiers of wines. First we would take their tasting room only brand, Decoy and redesign it to be widely distributed where their higher priced Duckhorn wines could not be. To do this, the design would need to be much more upscale and more commiserate with the quality promise of the other wines in the Duckhorn family. For the main tier and vineyard designates it was crucial to differentiate between these tiers as confusion had become prevalent despite their very different price points. Finally we would create the packaging for their new Cabernet Sauvignon based red blend that would represent the pinnacle of the Duckhorn Vineyards portfolio. 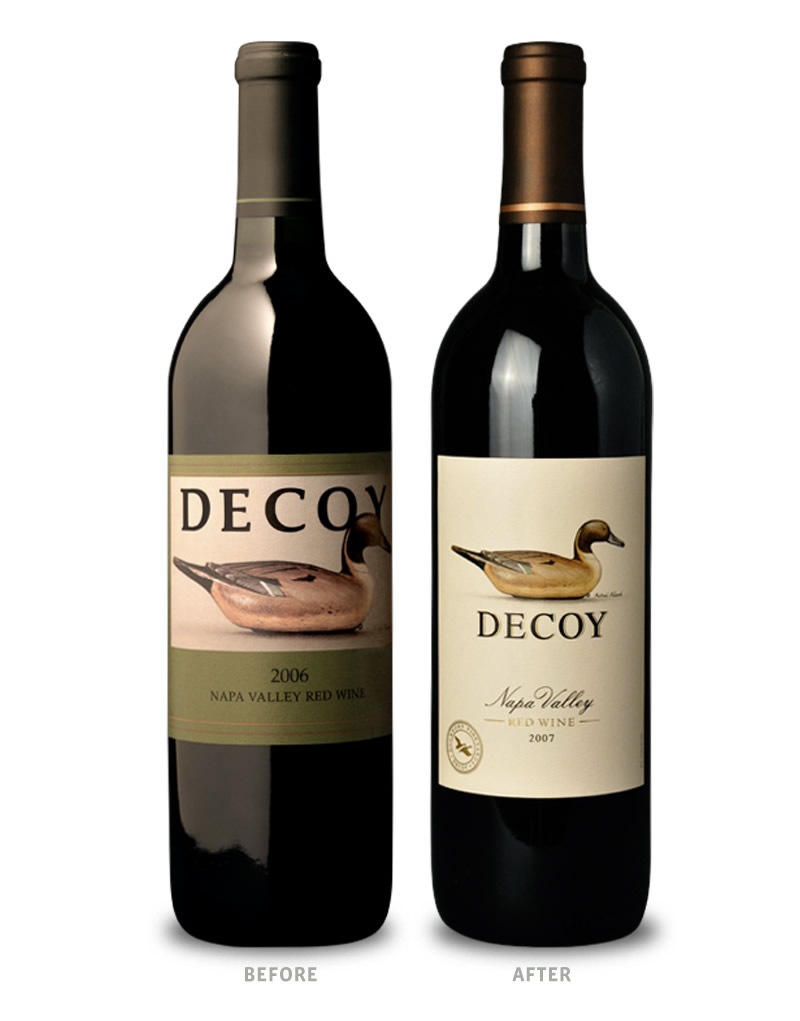 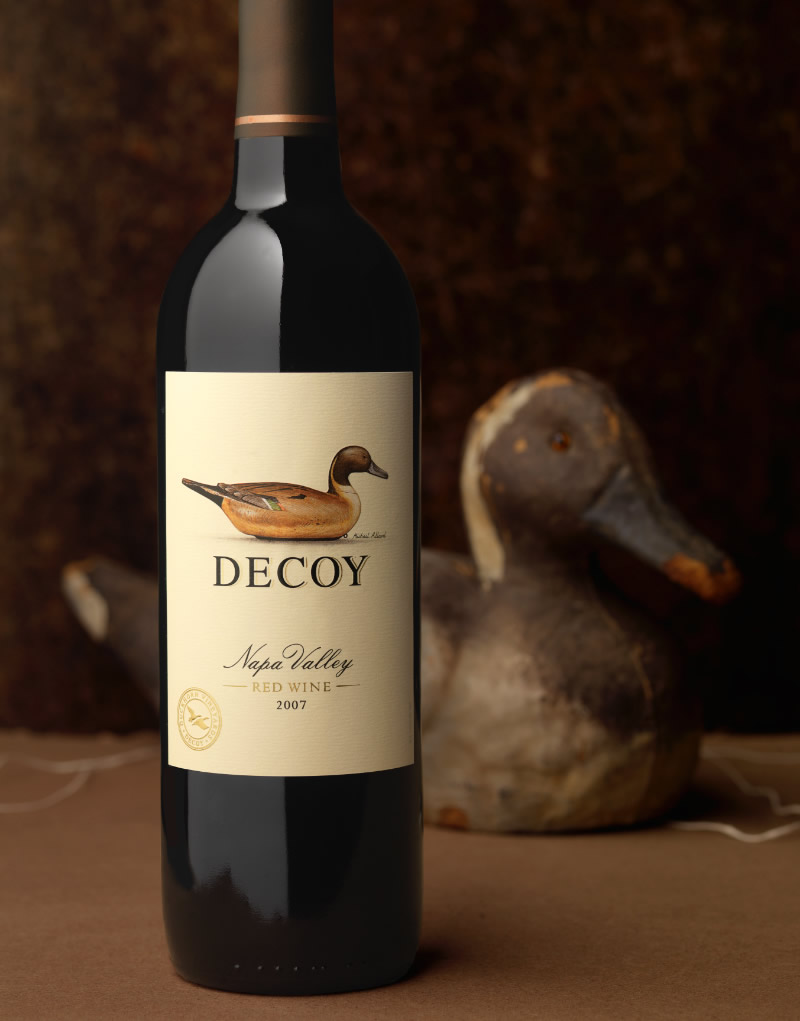 For the entry level Decoy, we leveraged the beautiful painting of the decoy on their existing label. A proprietary texture that looks like water ripples carved out of wood that was developed and debossed into the labels of all tiers including Decoy. The Decoy brand was intentionally designed as the entry level to the portfolio and rather than strongly branding it with the Duckhorn brand we instead designed a seal with the silhouettes of flying ducks that subtly notes the brand as part of Duckhorn Vineyards without infringing on the tiers above. 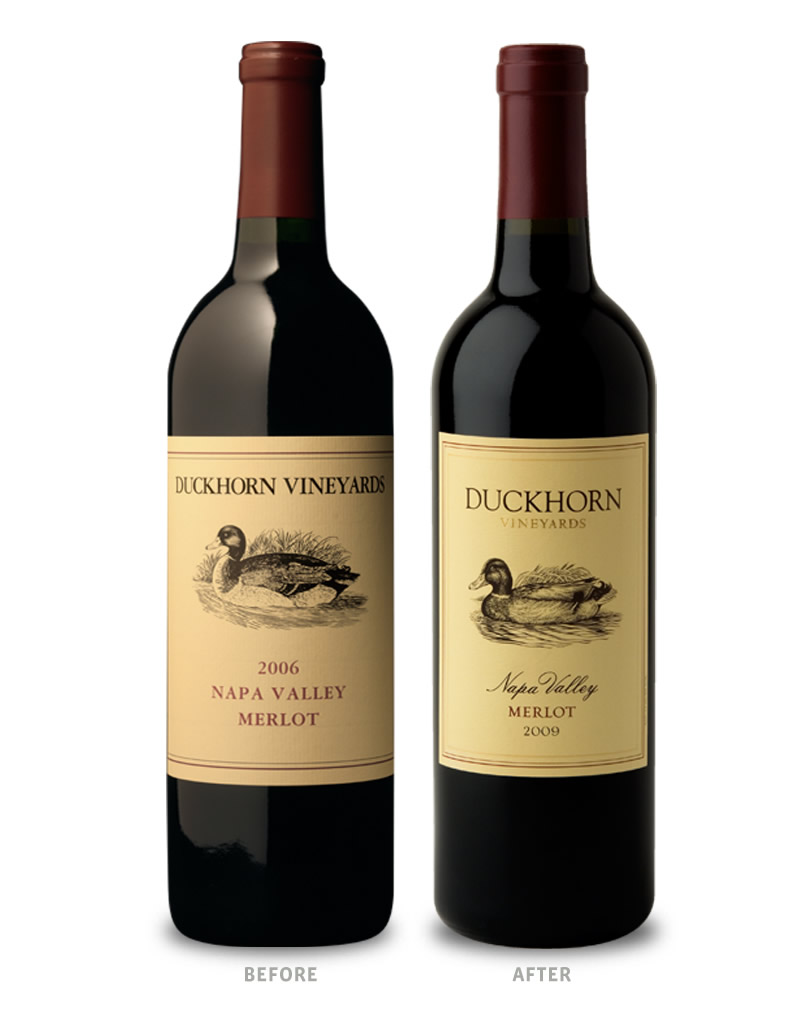 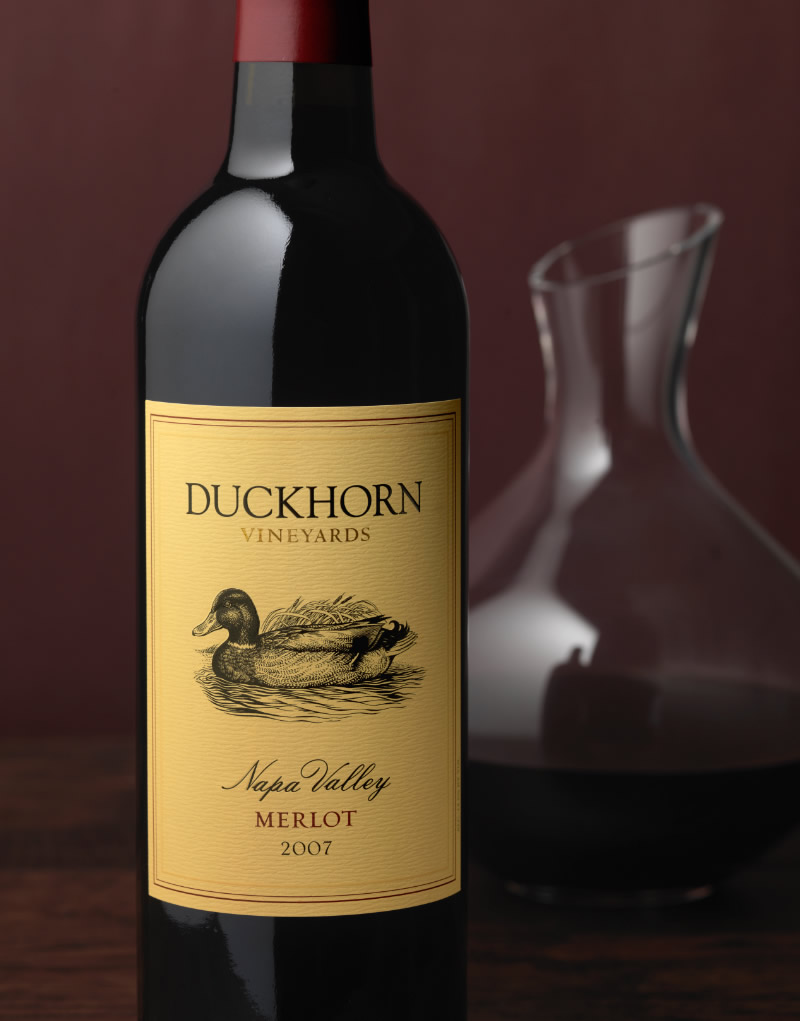 The key equity elements to their signature label were clearly its’ unique yellow color and iconic Mallard duck icon. Over the years the winery had amassed a collection of waterfowl artwork and showcased them at the winery’s tasting room. When we assessed the brand’s icon, the inescapable truth was the Mallard duck simply wasn’t species correct and was at odds with the brand’s tie to natural realism. We worked with a nature artist to redrawn the mallard icon to be accurate. Next we created a new wordmark that stacked the brand name so that the Duckhorn could be increased in size for easier readability. The vineyard designate tier was designed to be clearly differentiated at a glance from the main Napa Valley tier, while still remaining firmly grounded as part of the overall brand look and feel. 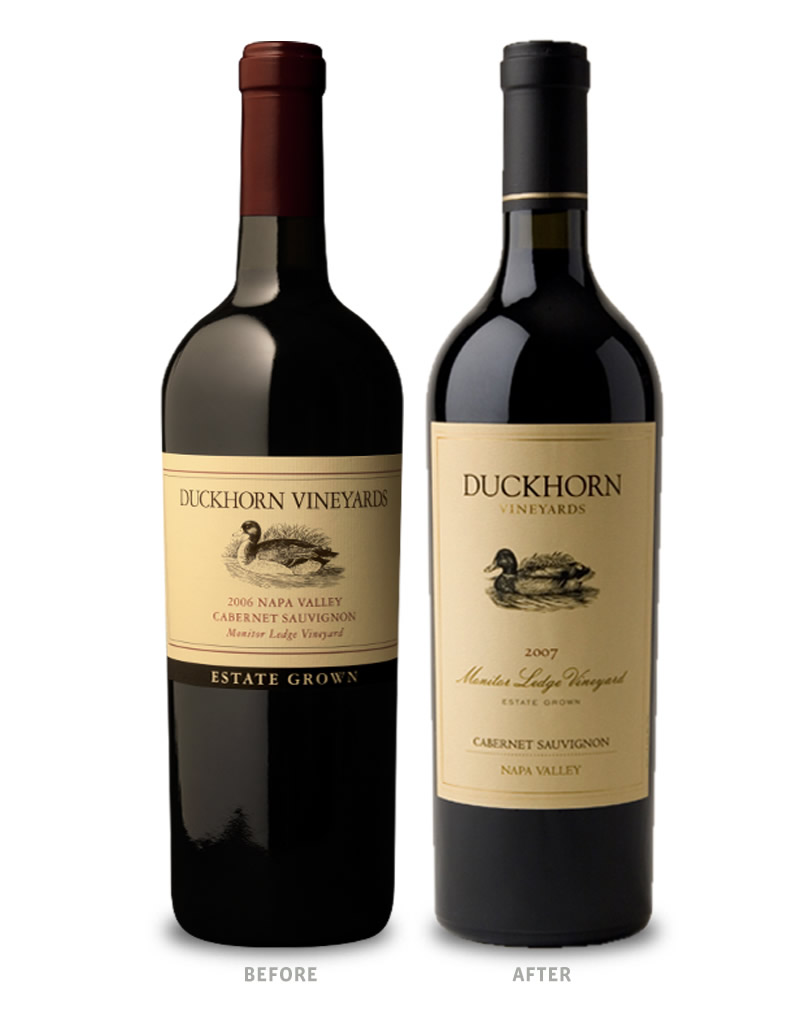 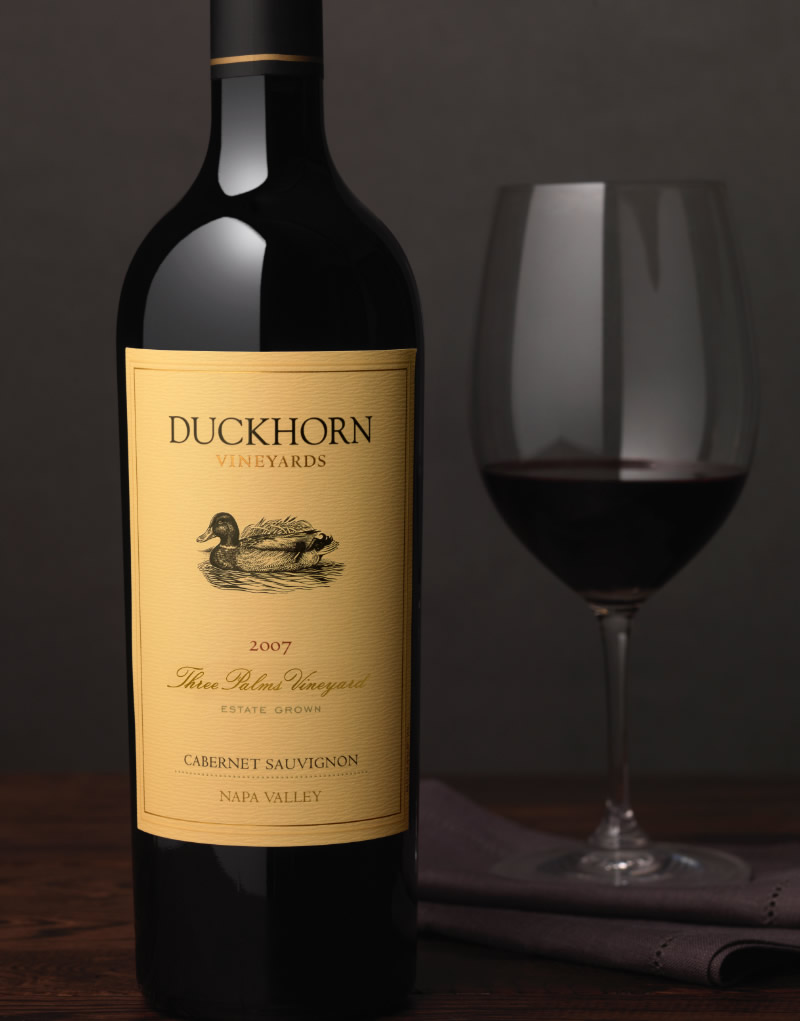 Over three decades ago, before crafting their first vintage, the Duckhorns and their winemaker had a passionate discussion. They debated making a Cuvée and ultimately chose to focus on varietal wines. Even so, Duckhorn Vineyards always remained fascinated by the artful blend of varietals. When the decision was made to create a proprietary Cuvée as their top tier wine, it became a natural for the name. 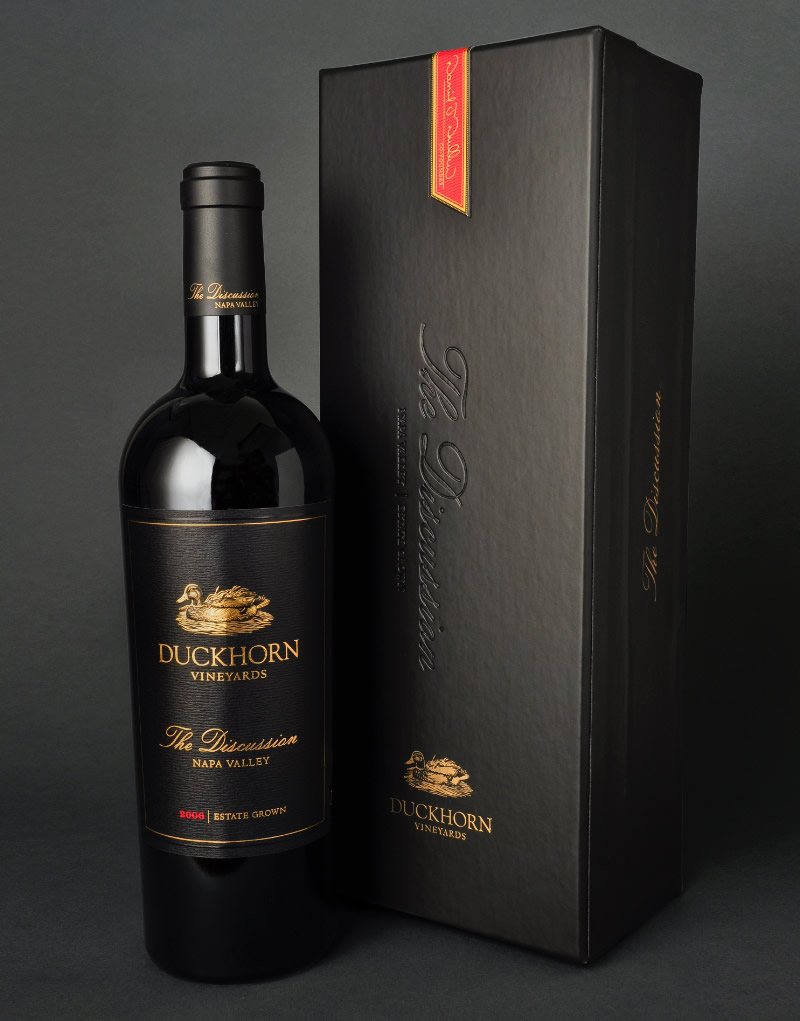 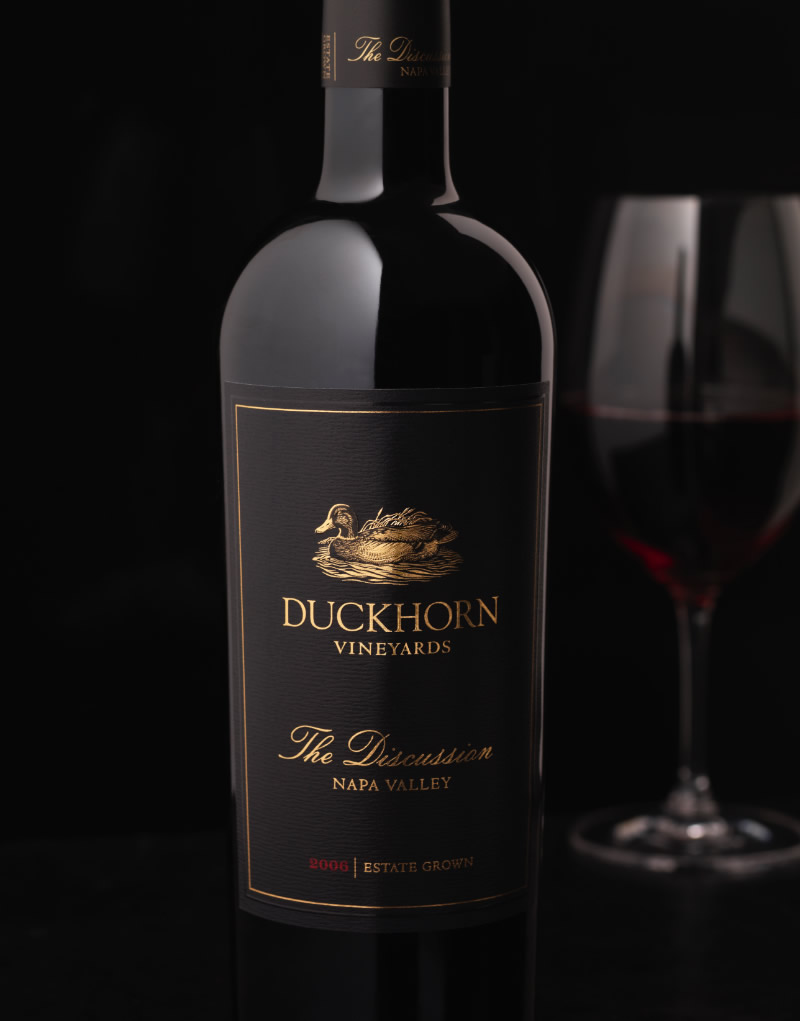 For the top tier we made the label black and drew the duck icon as a true reverse so instead of simply changing the color, which would have made it look like an x-ray of itself, it reads correctly in the gold foil. To house this exceptional wine, we designed a custom box crafted from a sleek neoprene-like material debossed with the branding that has become almost as much of a collectors item as the wine itself.

Immediately after its launch, the revitalized Duckhorn packaging was met with enthusiasm from distributors and key accounts. The new contemporary look allowed the winery to raise pricing for all the tiers by $10, increase production and expand distribution. Growth has been substantial and has lead to production quadrupling since launch of the new packaging. The Discussion has maintained its sought-after positioning and has repeatedly sold out upon release.

“CF Napa delivers creative and intelligent design that gives consumers an emotional connection with the product. They have been engaging and responsive partners, always collaborative and fully understanding of our brand essence and objectives. They consistently bring new and fresh ideas to the table.”